Come learn the trade of Master Boot Maker Kelly Martin in this two day workshop. You will build a set of moccasins from start to finish allowing you to learn many components of boot making.

Learn how to size, fit and function, hand sew, how to fit soles and insoles, and assembly. Kelly will also bring paint if you want to finish up with some paint customization on your moccasins!

All materials will be provided. 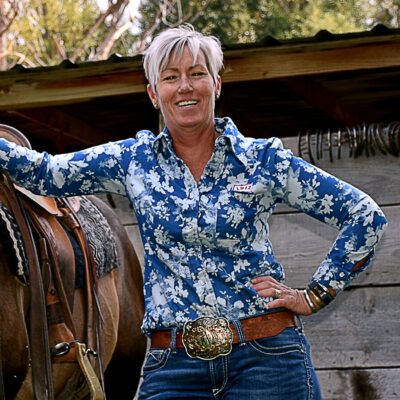 Kelly Martin’s bootmaking journey can be traced back to ranches and leather shops throughout the western U.S.

Her dad, George, bought a shoe repair shop in the early 70s and began building boots for working cowboys in the early 80s, in addition to his own saddles, chaps and other leather goods when he wasn’t working as a cowboy. The shop moved with every new cowboy job he took.

Kelly’s mom, Sharron, worked alongside her dad in the leather shop, building chinks, purses, and belts. She stitched all of the boot tops, and her dad designed the cowboy half sole they put on their boots

Kelly says her dad’s knowledge and support helped her earn her place in the bootmaker’s trade. She built her first solo pair of boots in 1990.

“I grew up working side-by-side with cowboys,” Kelly says. “I understand what they need to do their job because I’ve been in their boots — working cows, branding calves, making a living in a saddle.”

Kelly puts a lot of time into each pair of boots, using only top-of-the-line, quality materials. Her goal is to make something unique for everyone, so the design part of building boots is her favorite. She’s very proud of the fact that she has many longtime customers who return year-after-year to repair worn out boots or order a new pair for both dress and work.

Today, Kelly is based out of Battle Mountain, Nevada, where she lives with her husband, Josh McManus, and her dad.

Her daughter, Tasha Mashburn, and granddaughters, Gracie and Jorja, live just down the road. When she’s not busy at the shop, Kelly is at junior rodeos cheering them on. Her granddaughters also spend a lot of time in her shop, and she hopes one day they will be interested in taking up the bootmaker’s trade.

Kelly’s son, Monte Greene, lives in Sand Hollow, Idaho, with his wife, Jessie; son, Wyatt; and daughter, Sharron. Monte’s kids are pretty young now, but Kelly says that she hopes as they get older, they will spend time in the shop and that she can follow them on their rodeo trails, as well.