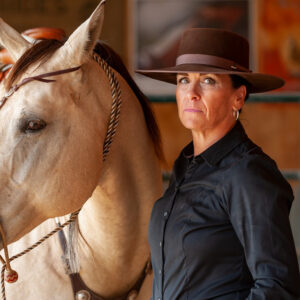 Preserving the West through her work and a passion for the equine, define artist Shannon Lawlor. Her connection to the land, people, horses and lifestyle of the modern West is palatable in the essence of her work – portrayed through her brush strokes – whether in the soft intensity of an eye of a working ranch horse, or the exquisite detail of a hackamore.

Growing up on the edge of the Northern Great Plains – a region known for extensive cattle ranching and cowboying – Lawlor has been drawing since the age of five, and it’s a passion that hasn’t waned since. Before becoming a full-time artist, her life was spent in the saddle, around the animals she would one day be renowned for depicting in her art, considering them “one of the true stewards of the West.” Purposeful horsemanship is important to her, as is the authenticity of gear – a nuance not lost on her collectors, for her work is known for its “correctness” in detail.

If it was the pure enjoyment of drawing and painting horses that propelled her into pursuing the life of an artist fulltime, it is her continued deep sense of pride in knowing the West is her lifestyle and her people, that gives her a sense of obligation to authentically preserve it. Ultimately it is her wide range of collectors who benefit, with the opportunity and gratitude to feel that sense of her love for the West, and are inspired to collect her work. “Many people in the lifestyle of the West collect my work, and those who are removed from it, yet fully appreciate the West – also collect it,” says Lawlor.

“This is by far the greatest residual from doing what I do,” says Lawlor. “Over the years, I have met some wonderful people who have not only became collectors, but stayed in my life as dear friends and some, the sense of having an extended family. Seeing the joy on their faces when I create a piece for them, feeling their appreciation for my work, is second to none. It never ceases to amaze me how deeply appreciative people are. How the artwork resonates with them – still perplexes me.”