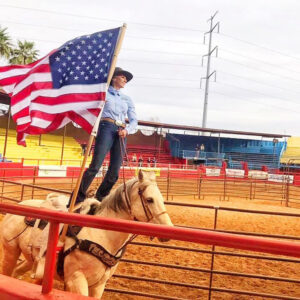 Brandi Phillips has served as the featured performer and lead trainer of the Riata Ranch Cowboy Girls from 2003 to 2015. In her lead role of the world-renowned Western entertainment company, Phillips has worked tirelessly both as a center-stage performing headliner and behind the scenes, handling everything from media duties to the training of new students and horses. Phillips handled television and radio interviews for pre-event promotions and post-event coverage, at local, state, national and international levels. She and the Riata Ranch Cowboy Girls have been featured by a vast range of media outlets, by both the Western-lifestyle and mainstream media. Western Horseman, as one example, featured Phillips and the Riata Ranch Cowboy Girls for their mentorship and leadership programs back home on the ranch in Three Rivers, Calif. Flaunt Magazine used the same scenic rural backdrop to spotlight the talent and beauty of Phillips and company trick riding in the hills on the ranch, in both print and video.

The Riata Ranch Cowboy Girls have four times finished among the top five as the Professional Rodeo Cowboys Association’s Dress Act of the Year, and Phillips has led that charge. As a trick roper, Phillips and the Riata Ranch Cowboy Girls performed in the opening ceremonies at the 2010 World Equestrian Games in Lexington, Ky. Also in 2010, Phillips was named the champion of the inaugural, invitational North American Trick Riding Championship, which was held in conjunction with the Royal Winter Fair in Toronto, Canada. Phillips followed that up by teaching trick riding clinics across Australia in 2011-12. At the invitation of Queen Elizabeth II, Phillips and the Riata Ranch Cowboy Girls trick roped at her 2012 Diamond Jubilee Celebration in Windsor, England, in tribute to her 60-year reign. Phillips performed at a number of the most prestigious and award-winning professional rodeos in America each year, the California Rodeo-Salinas, Pendleton (Ore.) Round-Up, Reno (Nev.) Rodeo, Dodge City (Kan.) Roundup and Rooftop Rodeo in Estes Park, Colo., to name a few.

Riata Ranch has been a huge staple in my life. I’ve had adversity in my life, and Riata Ranch was always steady constant that I could count on. I have great gratitude for the many life lessons learned while traveling, performing, and riding for the Riata Ranch brand. It was an invaluable 13-year experience that created a strong foundation, and it’s now time to spread my adult wings and fly into the next chapter of my career and life. I continue to work hard at my trick riding, and have enjoyed enhancing rodeo and bull riding performances by performing solo for the first time the past two years.