The purpose of the Betty Kunesh Legacy Award is to honor women in the west that have left a mark in their families, communities, and the western heritage, just like Betty. Betty Kunesh is Founder Tammy Pate’s grandmother, and the true inspiration for Art of the Cowgirl. We would like to honor other women like Betty with the Cowgirl Spirit through this award.

Nominations for the award are now closed. 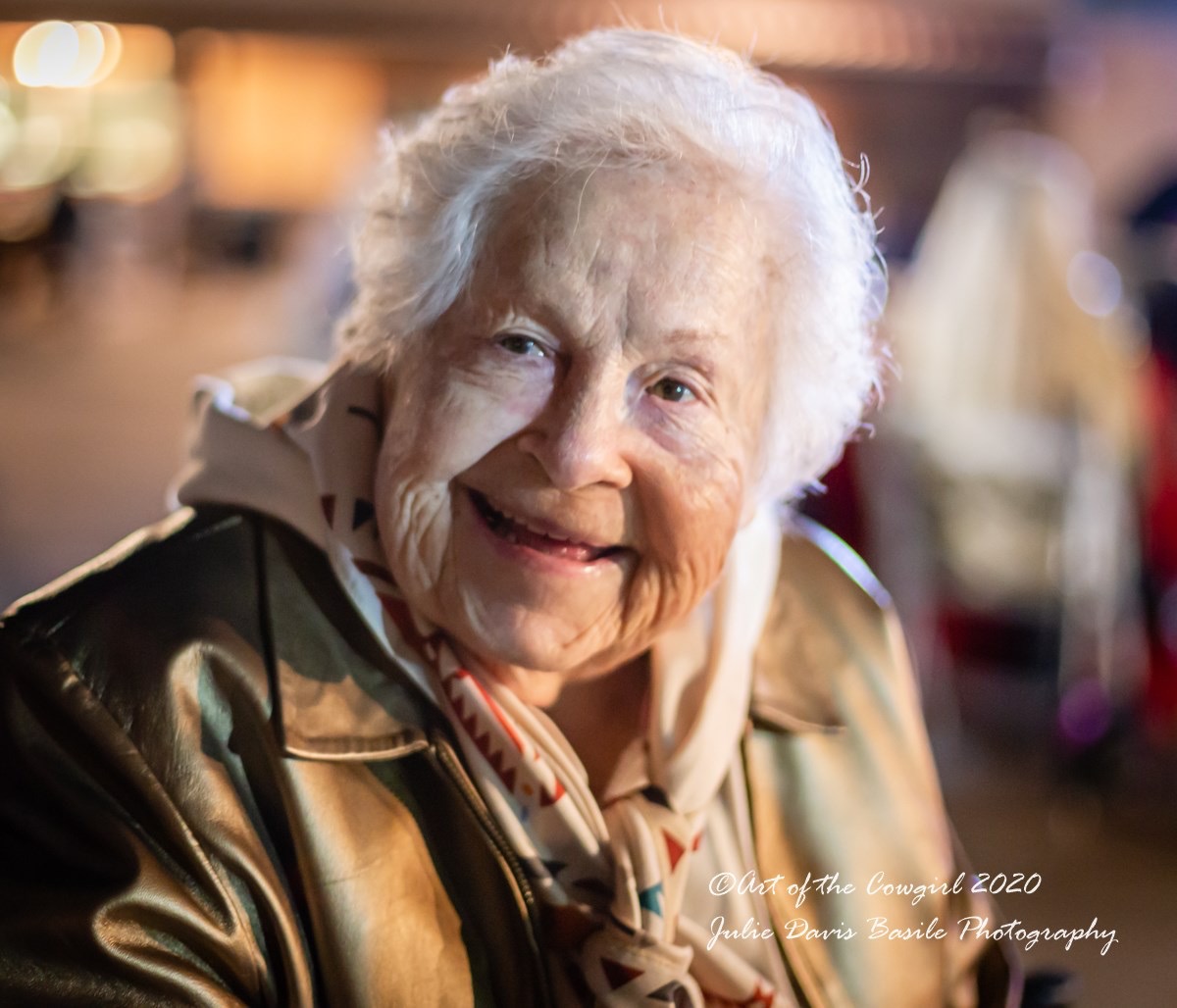 Betty Kunesh, born Alma Elizabeth Williams of Rapelje, Montana, is not only the matriarch of her family, but the true inspiration behind Art of the Cowgirl.  As the grandmother of Tammy Pate, founder of Art of the Cowgirl, Betty instilled a love of horses, art and the western way of life in Tammy from a young age.

The daughter of Inez and Robert Owen Williams, Betty was the second born of eight children.  As homesteaders of Rapelje, her father, a Welsh immigrant who came to the United States at twelve-years-old, mother and all of the children lived simply in an area that is referred to as the Big Coulee, a vast ranch and farmland tucked into the south-central region of Montana.  Driving south of the town of Ryegate, Montana, will find you on a dirt road down the rimrocks into the Big Coulee, where a patchwork of dirt roads, wheat fields and cattle pastures will still lead you to the original Williams Ranch today.

Betty grew up horseback.  She helped her father break horses to ride and drive from a young age, along with learning the duties of keeping the house and caring for her family.  Her aptitude as a horsewoman was matched by her appreciation of the world around her and her ability to convey that in art.  She became a talented artist, her main subjects being the animals and natural world of her beloved prairie.

On July 3rd, 1941 Betty married Eddy Kunesh during the Livingston Rodeo.  Eddy was also a talented horseman from the Big Coulee.  They built their home just south of Ryegate, Montana, the Crazy Mountains to the West, Snowy Mountains to the North and Betty’s beloved Big Coulee a few miles to the West.  Betty and Eddy raised two children, Shirley and Bobby, ranched and raised, trained and sold horses.  Their shared greatest joy was in their grandchildren, and they both made sure they always had the very best horses!

Tammy, born Tammy Clark, shared a very special bond that continues to this day.  Of all of her grandchildren, Tammy showed the most interest in painting and drawing along with being the best cowgirl she could be.  Betty taught Tammy how to see the beauty if every day things.  Betty was never rich in monetary ways, but her life has been enriched by the every day beauty around her.  That is something she passed onto Tammy, and taught her to capture in not only art, but in how she faces every day.

Betty’s gift as a mentor was not limited to her family.  Community is something she holds dear even to this day.  In her 99 years she has influenced the lives of so many, from teaching all of her girls to cook, sew, paint and appreciate good horses, to doing the same for neighbors and friends, to spending countless days cooking for the community and being a confidant to the ones she holds close to her heart.  Her life has been her own Fellowship and was the inspiration behind the Art of the Cowgirl Fellowship Program.

In honor of Grandma Betty we have created the Betty Kunesh Legacy Award.  This award is to be given to a woman who has been nominated by someone who they have influenced.  Our hope is to honor those special women who are not always in the lime light: the women who work hard their whole lives leading by example, embracing fellowship and community. 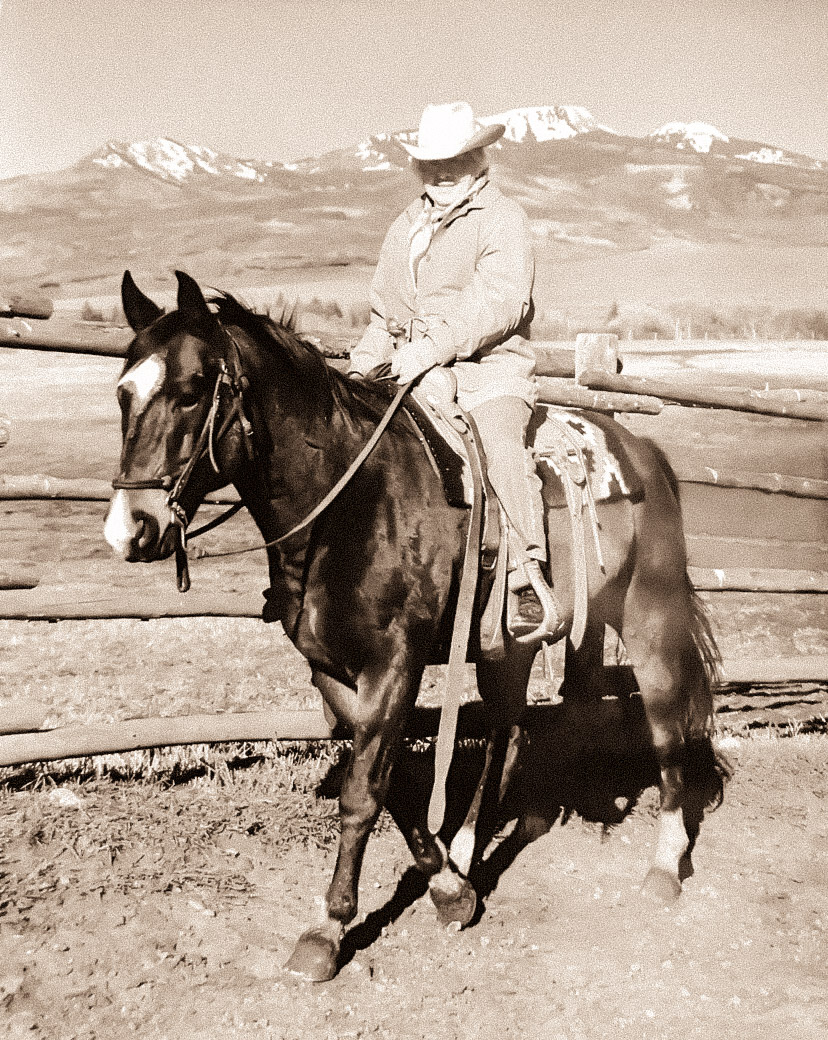 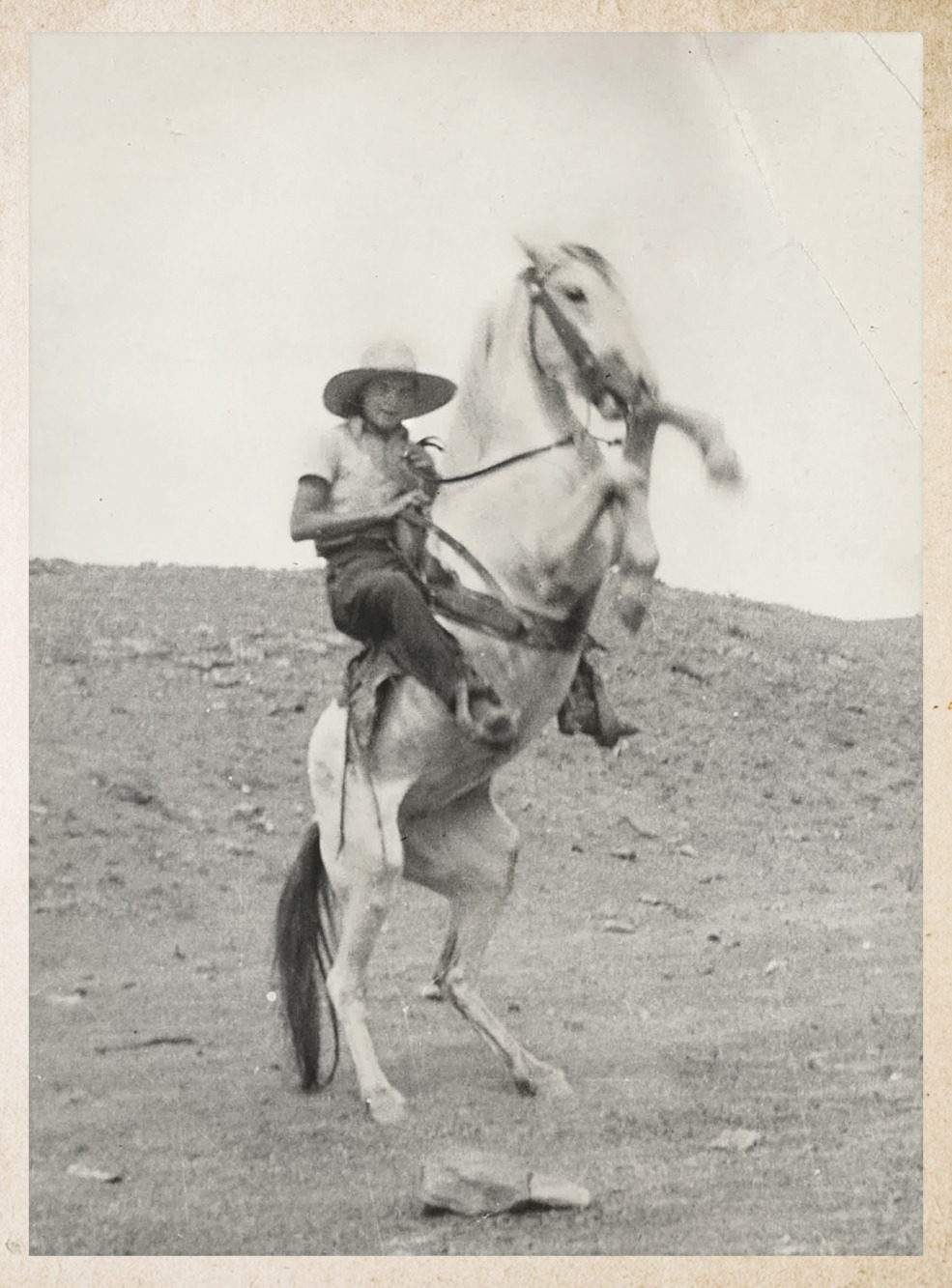 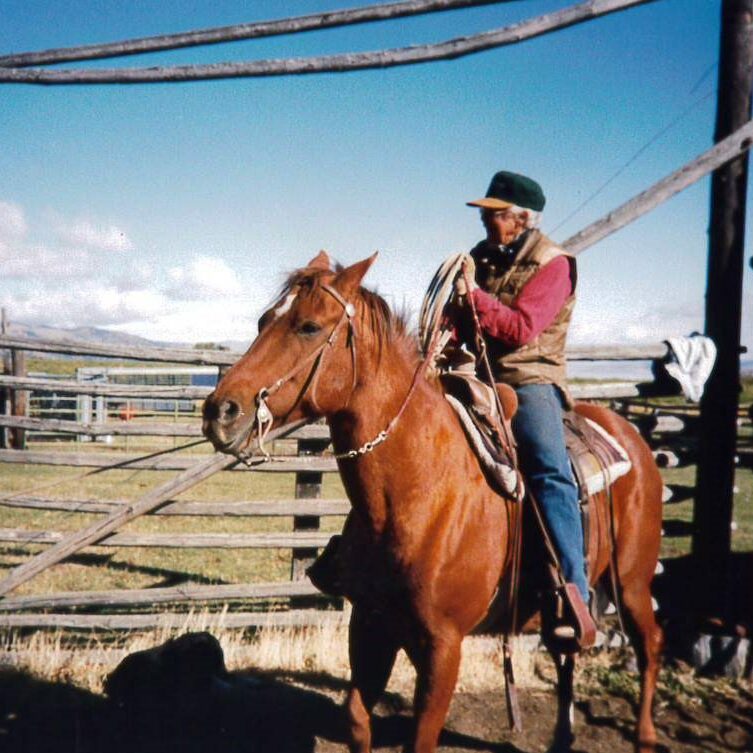 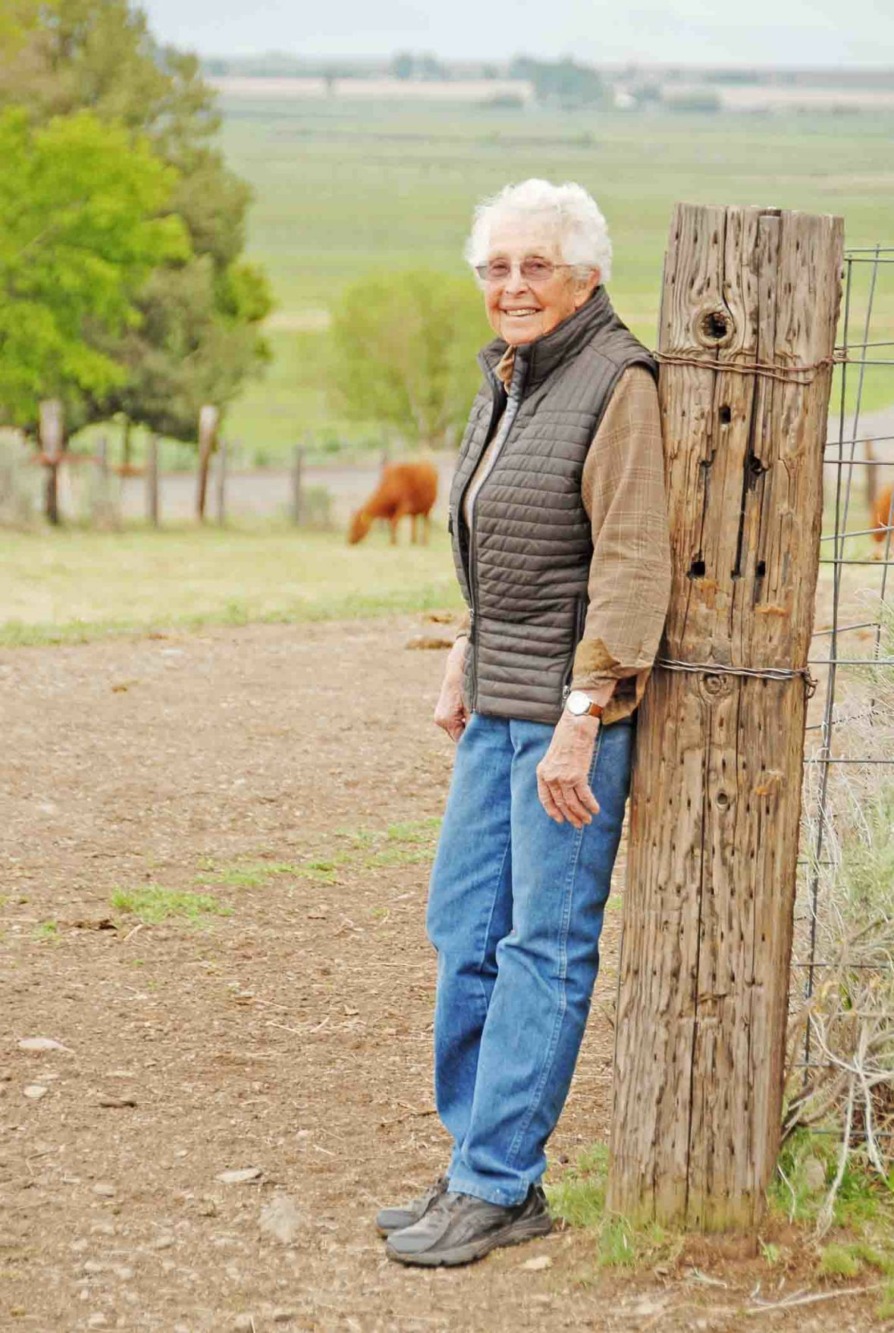 Norma Hapgood is not, make that NOT, a good little woman who likes to putter around the house.

“I always rode with my dad. I didn’t like inside stuff,” she explains with obvious pride. For more than 91 years — “I don’t know where that time went” — she’s lived in Modoc County’s Surprise Valley. Her parents, Roy and Vida Hanks, had a ranch outside Fort Bidwell.

“I am not a cook,” she emphasizes. “ ‘Bout the first breakfast I cooked was after Hilyard passed away,” she said, referring to her husband, who died in 1995. “No, no, being indoors, that’s not me. I avoided the house.”

“We had a little starve-out place,” she said of the family ranch, where they ran cattle and had milk cows. The fourth of seven children, she helped with all the chores, including milking cows and selling the cream — “I’ll tell you what. I know how to milk a cow” — and thrived spending time horseback. “I’m sure I rode more than a million miles. I’ve spent many an hour horseback and I’ve loved every minute of it. I always had a saddle horse. I didn’t always have a saddle,” she quips.

During good weather she and her sisters and brothers rode horseback to school. “That was the fun thing in my life, my horses. I’ve had some good horses. They were tough, tough horses.”

Life got tougher when Hapgood was 12 and her mother died. “Life changed after that I’ll tell you.”

Still, she enjoyed her growing-up years. Hapgood was part of the Fort Bidwell baseball town team, one that included boys and girls, and later played catcher for her fast ball pitching daughter Jeanne. Baseball is still a favored pastime. She watches San Francisco Giants games on television and admits to sometimes falling asleep. She is a loyal fan but, living so far from San Francisco, she has never attended a game.

More than baseball, Hapgood likes dancing. She found a dance partner after graduating in 1942 from Surprise Valley High School in Cedarville, the valley’s largest town. While working at the grocery store, she met Hilyard Hapgood, who made periodic town visits from his family ranch at Calcutta, 40 miles away on the present-day Sheldon National Wildlife Refuge in Nevada. She doesn’t remember the details, “but I’m sure it was at dances” where their romance blossomed. “Hilyard, he could dance,” she tells with a schoolgirl grin. They were married in 1944 and lived at Calcutta.

“We rode every place,” she said, recalling cattle drives and the winter they gathered 40 head of pinto horses for the U.S. Fish and Wildlife Service, drove them from the Sheldon to Cedarville then, a day later, over the Warner Mountains to Alturas. “The snow was so deep it was at my stirrups. Talk about cold. We had icicles on our horses’ noses.”

Winters were spent at different places until 1949, when the Hapgoods bought the house that’s still her home and added neighboring ranches. During their peak years, she estimates the family owned about 2,000 acres, ran about 500 head of cattle and raised hay on 500 acres. Her “work-alcoholic” daughter and son-in-law, Bonnie and Joe Erquiaga, have taken over management of the ranch. Her grandson, Jeff, a veterinarian in Colorado, provides the family with Red Angus bulls for breeding. “We’re really proud of our cows,” said Hapgood, who’s also proud of her family. “Everybody knows how to work and everybody can do each other’s jobs.”

She’s been hobbled by two hip replacements and two shoulder surgeries — “I can’t throw a rope,” she moans — but still takes on chores. “I get up at 5 o’clock and get to work.” Asked if she still rides horseback she answers, “Oh heavens, yes,” although she confesses to needing help getting a horse saddled and steps on a bale of hay to climb aboard.

Hapgood, who wears a perpetual smile and is firecracker sparkly, has no complaints.

“Nobody had a better life than me. There’s no part of ranching and my life I don’t like. Made us a living. We worked hard. We were up early and worked late. Think of the fun times we had,” Hapgood reminisces. “I’ve really liked every day of it. I’d like to go back and do it again.”

Materials must be submitted by November 10th, 2022.

Nominees should be any Western woman who embodies the cowgirl spirit and is making an impact in the western lifestyle. Nominee must be a resident of the United States or Canada.

The nominee should demonstrate the following attributes:

The Art of the Cowgirl staff will review the nominations and select the winner. The winner will be notified by November 20th to allow for travel arrangements to Art of the Cowgirl, January 18-22nd, in Queen Creek, AZ.

The award will be presented at Horseshoe Park and Equestrian Centre during Art of the Cowgirl. The winner will receive a buckle and special presentation.