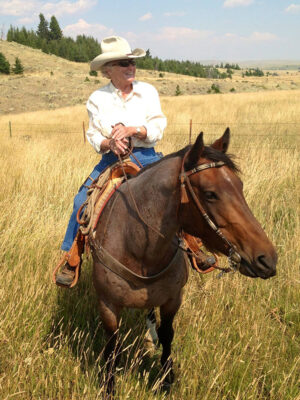 Barbara Van Cleve’s heritage is rich with family history and firsthand experience. Her family’s ranch, the Lazy K Bar, was founded in 1880 on the east slopes of the Crazy Mount...Read More 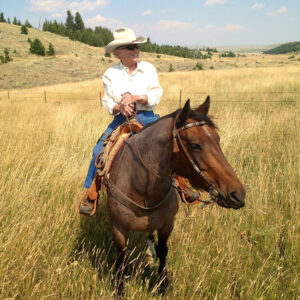 Barbara Van Cleve’s heritage is rich with family history and firsthand experience. Her family’s ranch, the Lazy K Bar, was founded in 1880 on the east slopes of the Crazy Mountains near Melville, Montana. Her father, Spike Van Cleve, was a unique combination of writer, poet, Harvard scholar, and experienced horseman and “a pure quill Montanan’” as her father once put it.

As a photographer, she has held a camera since she was 11 years old when her parents gave her a “Brownie” camera and a home developing kit. Her youthful interest in photography soon grew into a lifelong commitment. Ranch work also began early for Barbara. Barely six, she could be found helping at the corrals or sitting astride a horse. Ever since, she has been documenting the “true grit” and romantic beauty of her experiences on the ranch and on other ranches in the West.

Along the way, she earned a MA in English Literature at Northwestern University in Evanston, Illinois, was a Dean of Women at DePaul University in Chicago, Illinois, and she taught English Literature and later photography, for over 25 winters at De Paul University, Loyola University and Mundelein College, all in the Chicago area. At the same time photography continued to be a passionate avocation. In her free time, she worked for Rand McNally as a textbook photographer and also established her own stock photography agency. The long summers were usually spent on the family ranch in Montana.

She moved to Santa Fe in late 1980 to concentrate on photography full time and had her first major exhibition in the fall of 1985. Since that time she has had over 60 one-person shows and has been in over 100 group shows. Her work is in public and private collections in the United States as well as internationally. Her photography has been published in Roughstock Sonnets (with poetry by Paul Zarzyski), Way Out West, and Cowboys: A horseback Heritage. KOAT-TV, an ABC affiliate in Albuquerque, New Mexico produced and aired a thirty-minute video documentary, “Barbara Van Cleve: Capturing Grace”, in 1993. In the Fall, 1995 her book, Hard Twist: Western Ranch Women was published by the Museum of New Mexico Press, and she was inducted into the Cowgirl Museum and Hall of Fame in Fort Worth, Texas. All This Way for the Short Ride (with poet Paul Zarzyski) was published by the Museum of New Mexico Press in 1997. Her newest project is a book Holding the Reins written by Mark Talbert and illustrated with her photographs about ranch girls. It was published by Harper Collins in February 2003. She moved back to Big Timber, Montana, her hometown, where she has her studio and is close to the family ranch. 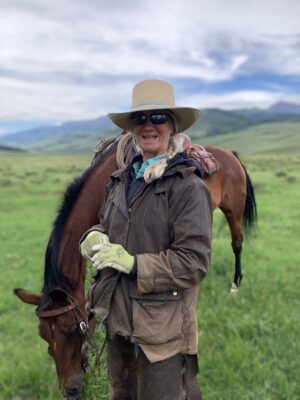 Barbara East, whose dual careers have spanned 50 years, is an artist, a cowgirl and a keeper of the land.

“My notebooks from 1st grade through school, were completely full of ...Read More 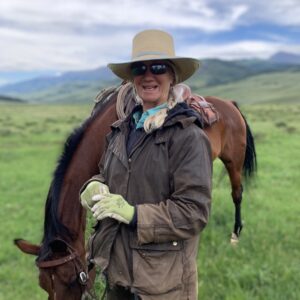 Barbara East, whose dual careers have spanned 50 years, is an artist, a cowgirl and a keeper of the land.

“My notebooks from 1st grade through school, were completely full of sketches; of horses, then cows cowboys, and rangelands.

There was never any question about what I wanted to be when I grew up.”

Art gives me a sensitivity towards all things out there from the smallest flower, to  the nuances and   expressions of animals, to how I get cattle to happily graze the sides of a mammoth peak.

Riding the Range to me is an art which gives me a sense of accomplishment and the personal courage to believe in myself and my work.

Barbara East has spent most of her summers riding in  Western Colorados Gunnison Basin. She spends her winters painting. 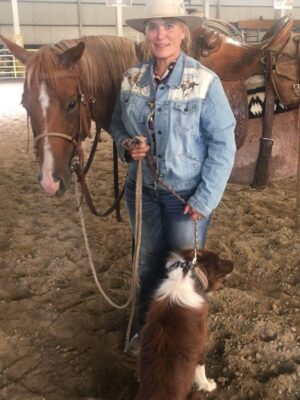 Robin Nuffer-Brown was born and raised on a third-generation cattle ranch in Idaho, where the mountains and valleys were a classroom and here she learned all aspects of ranching an...Read More 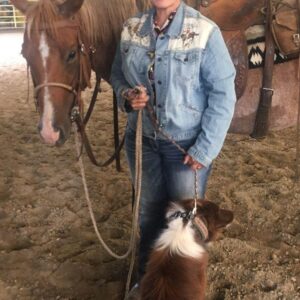 Robin Nuffer-Brown was born and raised on a third-generation cattle ranch in Idaho, where the mountains and valleys were a classroom and here she learned all aspects of ranching and the art of being a cowgirl. Inspired by how the swift intellect, grace, and tough spirit of the working stockdog made every job more efficient, less stressful and easier, she set about trailblazing a path to training and working with Border Collies. For over 35 years, stockmanship and mutual respect have been essential to her work, and her methods have brought national wins and titles early in her career, though the greatest accomplishments have been raising three beautiful daughters and teaching all the dogs and people along the way. Robin focuses on training, giving clinics, demonstrations, and lessons across the country (and at home in Idaho). She also has a one-of-a-kind Border Collie workshop Retreat that is a life changing experience and game changer for learning. Robin is excited for the future and sharing good experiences with her 2 new grandbabies! 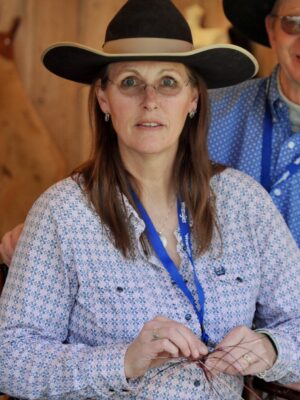 Teresa Black of Plush, Oregon, is an expert in rawhide braiding and horse hair hitching. 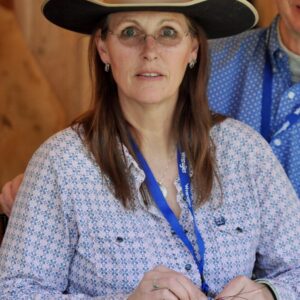 Teresa Black of Plush, Oregon, is an expert in rawhide braiding and horse hair hitching.

Originally exposed to leather work, Teresa discovered rawhide braiding in 2000 when she met Bill Black, renowned western gear maker. They were married 2001, and soon after, Bill began teaching Teresa the art of braiding a reata and she has been braiding ever since.

Their daughter, Montana, was born in 2004 and is also starting to braid and do leather work. Teresa has established herself as a talented horsewoman, artist and maker in the western industry. 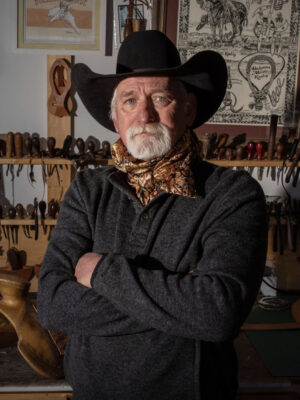 John Willemsma grew up spending time at the horse stables surrounding his home in southern California. After leaving California and moving with his parents to the Netherlands and t...Read More 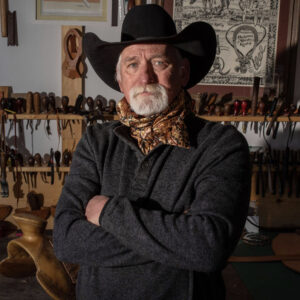 John Willemsma grew up spending time at the horse stables surrounding his home in southern California. After leaving California and moving with his parents to the Netherlands and then to Virginia, he continued to ride and compete in rodeos. John returned to the west in 1976 moving to Amarillo, Texas, where he attended a saddlemaking trade school. After a year in Texas he would spend the next 10 years working in saddle shops in Kansas, New Mexico and Oklahoma opening his own shop in 1987. His first introduction to seeing saddles as “Functional Art” came in 1988 when he was invited to show his work at the “Trappings of the American West“ in Flagstaff, Arizona. Seeing and being influenced by the work of contemporary masters such as Dale Harwood, Don King and Chuck Stormes led John on journey that he continues to this day.

After 48 years of designing and building saddles, Willemsma still prefers to draw his own original floral designs… a mix of Early California and what he describes as New California style on paper before he transfers it on to the leather as it allows him to create a more intricate pattern. His experience in both the roping pen and working cattle outside give him the unique perspective of being able to keep one foot in the Cowboy world and the other in the growing interest in Western Art and collectibles. John has been a member of the Traditional Cowboy Arts Association since 2008 and has served as an officer and President.

John and his wife Debbie live in the Wet Mountain Valley out side of Westcliffe, Colorado 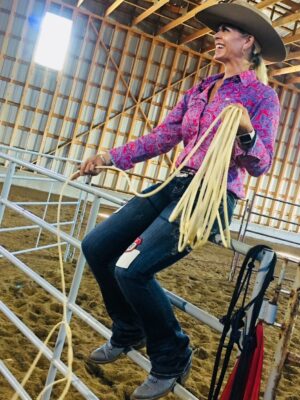 For over 20 years Trina has been traveling across Canada and the United States conducting horsemanship clinics, helping folks from all walks of life, from a variety of equine disci...Read More 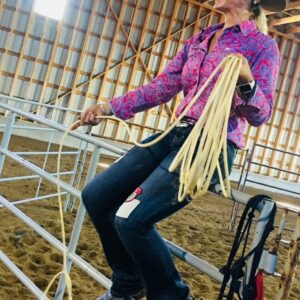 For over 20 years Trina has been traveling across Canada and the United States conducting horsemanship clinics, helping folks from all walks of life, from a variety of equine disciplines, to better understand their horses.  From packing, driving and shoeing horses with her outfitter father in the Canadian Rockies, to being one of the youngest grooms at Spruce Meadows. Trina has shown hunters, eventers, open jumpers and readied Andalusians for international competition, as well as staring many head of colts and riding the big country taking care of thousands of head of momma cows, riding cutters and cow horses, Trina brings to us a wealth of diverse experience and an understanding and dedication to the horse and human that is second to none!

Trina has been featured on Equestrian Legacy Radio, Western Horseman, The Heart of Horsemanship Podcast, Horseman's Round Up. And to think it all started on the eastern slopes of the Canadian Rockies where she was packed in a pack box at the age of 2  headed with her Pops to Mt. Assiniboine.

Lisa Sorrell is an award winning artist working in the medium of leather. She builds cowboy boots in her shop in Guthrie, working from flat pieces of leather and the client’s mea...Read More 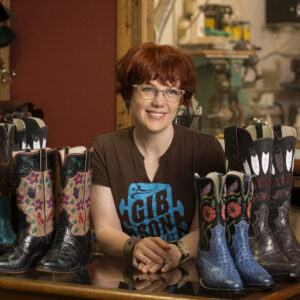 Lisa Sorrell is an award winning artist working in the medium of leather. She builds cowboy boots in her shop in Guthrie, working from flat pieces of leather and the client’s measurements, and using hand tools and vintage machinery. She maintains a portfolio of original designs and is well-known in the boot making world for her design skills. She speaks, teaches, and writes; her book “The Art of Leather Inlay and Overlay” is a textbook on the topic of creating art with leather.

Raised in a conservative, small church where the ladies all wore long hair and long dresses, she began sewing clothing at age 12 and by age 15 was sewing clothing professionally. At age 20, newly married and transplanted to Oklahoma,  she answered an ad placed in the local newspaper for someone to “stitch boot tops.” She’d never worn cowboy boots, didn’t realize that people could make footwear, and never been around anyone who drank alcohol or swore. The  learning curve was steep but the craft of cowboy boot making beckoned as destiny.

Lisa enjoys speaking about cowboy boots and cowboy boot making, and she  also teaches and writes on the topic of cowboy boots, footwear, and creating art  with leather.